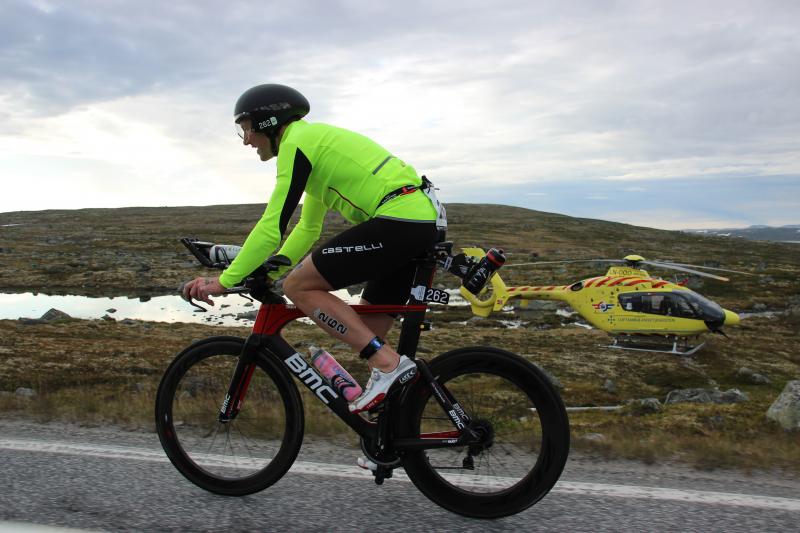 Ten years ago, the first Norseman Xtreme Triathlon carved its own category in international triathlon. Norseman has remained true to its core ever since, and continues to attract triathletes from around the world to the ultimate test of endurance, grit, sportsmanship and friendly competition through some of Norway's most amazing landscapes. The Isklar Norseman Xtreme Triathlon is considered the ultimate triathlon on the planet, and the race that any hard core triathlete should do at least once.

The course runs point-to-point – or fjord to peak: Starting at sea level, with a 4 meter drop off a ferry into the Hardangerfjord, crossing the starkly haunting Hardangervidda mountain plateau, finishing at the rocky peak of Gaustatoppen, at 1,850m above sea level and 220km away.

Norseman is a long day’s journey through some of Norway’s most spectacular scenery. The total ascent is 5,000 meters. The water is cold, clean, and comes lightly salted. The weather can be anything from brilliantly beautiful to blasting blizzard. If you’re really lucky, you may see porpoises, orcas or reindeer – or, more likely, baffled locals who think you are crazy, but will cheer you on anyway.

The male/female ratio is 85/15. Half of the athletes are Norwegian. The other half represent 40-some countries around the globe. With the organizers suspecting some may actually come from other planets, as their performances are just out of this world.

For safety reasons, Isklar Norseman Xtreme Triathlon is limited to 250 athletes. For the same reason, the number of athletes allowed to finish on top of the mountain is limited to 160. Those arriving later complete their iron-distance at the mountain plateau below the peak. And all this for the prize of a t-shirt: Black for those who finish on top of the mountain; white for those who finish on the plateau below. All equally fabulous.  Andy Edwards, our Vice President International Protective Services was selected for the race in August 2015.

The race is so tough each athlete must compete with a personal support team. Andy’s support crew included his wife Jo and two of his training friends from Dubai. The weather conditions for the race looked average but on the day of the race the organizers cut the swim distance for safety reasons as the water was the coldest it has ever been in the race history (10 degrees). With the swim discipline being Andy’s strongest this was a disappointment as he had the potential to create a great gap before the bike section. He came out of the water in ninth position, which is an amazing position from a group which included 30 professional triathletes.

The following bike section was just brutal.  Up, down, up, down. 180km of slogging it out in the mountains in around zero degrees, Andy came out of the second transition in 81st position.

For the final leg (the marathon), Andy held a great pace until turning over his ankle and breaking a bone in his foot on the roadside around 12km in. His team were able to supply a few pain killers and he persevered, managing to hit the 25km marker holding just under 5 minutes per km pace. The last 17km are all uphill (to the summit of mount Gaustatoppen); the first 12km on steep, winding road, then on to rocky paths and over boulders and snow drifts for the last 5km.  At the final checkpoint (the 37km marker and the one which dictates whether you get the coveted black t shirt), he was in 46th. Andy lost a few places on the final ascent to the top due to his ankle injury and the uneven rocks, but still came in 51st which earned him the coveted black t-shirt from the event.

Andy said, “Finishing was a massive relief.  I had some emotional, painful and tearful moments and cannot describe how hard it was, but the experience was just fantastic. My ankle is trashed though; perhaps due to having run almost 30km on it…!!” He is now back in Dubai where we are all in awe of his endurance. After a couple of weeks rest he is now back to his training and hopefully on the road to qualify for the Ironman World Championships in Kona in 2016.