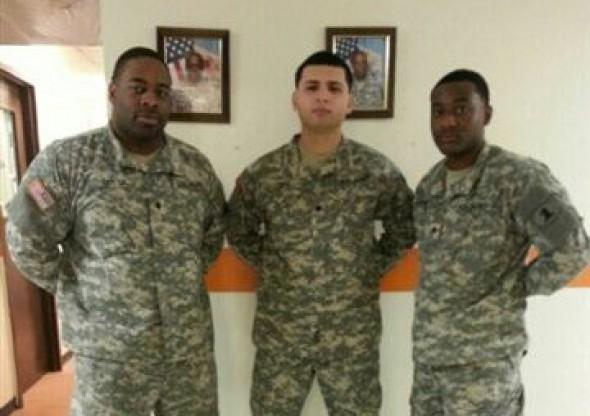 The same good humor, endless banter and easy camaraderie that Jorge Vidal, Will Mathews and George Taylor displayed working at GardaWorld Cash Services in Wilmington Delaware served them in good stead during their year-long deployment with the U.S. Army in Afghanistan from which they have recently returned.

The same good humor, endless banter and easy camaraderie that Jorge Vidal, Will Mathews and George Taylor displayed working at GardaWorld Cash Services in Wilmington Delaware served them in good stead during their year-long deployment with the U.S. Army in Afghanistan from which they have recently returned.

The three men were part of a telecommunications unit that was responsible for maintaining the communications network throughout Afghanistan and travelled extensively throughout the region performing routine maintenance to keep things running smoothly.

Upon their arrival, the trio split up and deployed to different regions of the country but, later in the tour of duty, reunited at the same base camp.

All three men agreed that access to the Internet and social media was a mixed blessing. It allowed them to see and talk with their families and keep current with what was happening at home but, at the same time, it increased the loneliness and sense of separation.

“In some ways it made it harder,” George said. “You saw all the things that you could not actually be a part of. It was nice to see but that can’t replace actually being there.”

Reunited toward the end of their tour, the trio happily slipped into their familiar “Band of Brothers” routine with good natured teasing and banter.

“Taylor would wake up just to pick fights with me instead of his wife,” Jorge said with a chuckle as George protested in the background. “We could argue about anything, how I slept, noises I made in my sleep – anything at all.”

While the men did not have the opportunity to meet any of their colleagues from GardaWorld International Protective Services, which provides security services to the U.S. Army, private companies and relief agencies throughout the country, the dining area provided ample opportunity to meet everyone in the camp.

“Eating chow is when everyone shows up and you can meet all sorts of people, George said, adding that ‘we are all in this together’ was the attitude pervaded mealtimes and helped everyone get through tough times and the absence of family.

After performing their service for their country in Afghanistan, Jorge, Will and George returned to Delaware to a hero’s welcome at the Wilmington branch where, after some time spent reuniting with their families, they resumed their jobs with pride.

“GardaWorld made the transition easy,” George noted, “We received all of our pay raises, vacation time and were given time to spend with our families.”  The bond among the three grew stronger in the service they gave to their country.

“Everyone was delighted to welcome them back,” their former manager and friend Pedro Maldonado, as the trio joked and laughed in the background. “They got right back into the swing of things. It is as if they never left.”