Canada’s 911 Ride - Atlantic is Back in New Brunswick 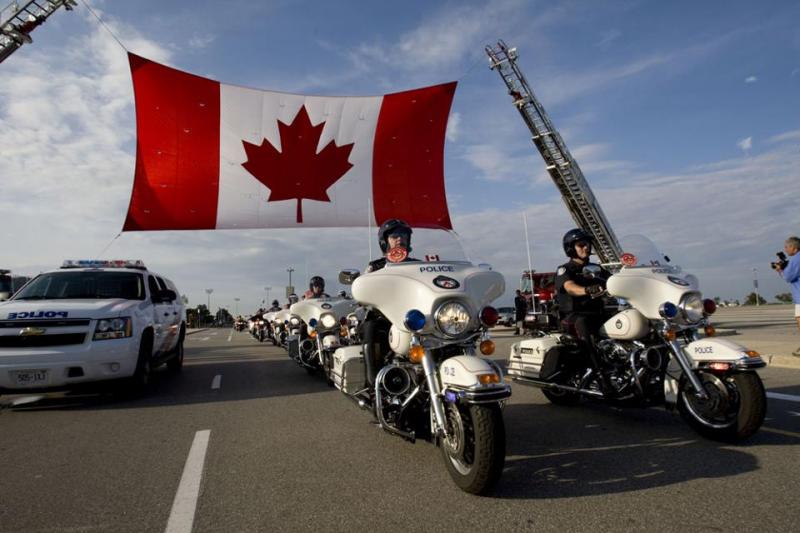 The Atlantic edition of Canada’s 911 Ride will be held June 9 and 10, 2018, in Saint John, New Brunswick. The event features an impressive police-escorted motorcycle ride and raises funds for a variety of causes, including helping families of fallen emergency service personnel; helping children who are the victims of violent crimes; and providing public access to defibrillators to help save lives.

Canada’s 911 Ride is an annual fundraising event that began in Ontario in 2005, and has, in recent years, expanded to include an Atlantic ride, through a partnership with GardaWorld.

In 2014, Darrell Coffin and Rob Murray from GardaWorld were invited to Canada’s 911 Ride in Ontario by Dan Lawrence, the foundation’s president, and retired Sgt. Jim Adamson of the Toronto Metro Police. Darrell expressed interest in bringing a version of the ride to the Maritime Provinces, in part because that year, his home city of Moncton, New Brunswick was grieving the deaths of three RCMP officers and a local paramedic—all of whom lost their lives in the line of duty.

Darrell, along with the support of GardaWorld, numerous volunteers, and police officers from New Brunswick, Nova Scotia, and Prince Edward Island, hosted a two-day escorted motorcycle ride throughout Moncton and the Fundy Coastal areas in June of 2015, one year after the deaths of the RCMP officers. The event involved RCMP officers from Moncton and the surrounding area, as well as municipal police officers from 19 different police agencies around the Maritimes, many of whom generously donated their time. They joined together and escorted motorcyclists from far and wide—even from Quebec, Ontario and Alberta—along a route that passed through many communities, including a stop at an RCMP Musical Ride event in Sackville, New Brunswick.

On the evening of the first day of the ride, at a banquet held in memory of the fallen first responders, defibrillators from the Mikey Network were placed into Community Service so they could continue to serve and help their community.

Darrell’s vision for the Atlantic Ride was always to host the Ride in different Maritime Provinces every year so in 2016, Canada’s 911 Ride - Atlantic moved to Halifax, Nova Scotia; then, in 2017, it was based out of Charlottetown, Prince Edward Island. The overwhelming support continued, with representation from almost all of the Municipal policing agencies from each of the Atlantic Provinces. In fact, the 2017 Ride had so many motorcycle participants that registration had to be cut off to ensure a controlled, safe and enjoyable experience for everyone.

At the 2016 banquet, Darrell introduced up-and-coming singer-songwriter Makayla Lynn, who performed “Fallen Hero”, a song she wrote in memory of the tragedy in Moncton. Makayla continues to return every year, showing her support as we honour those who served. During the 2017 ride, Makayla surprised everyone with “Ride On”, a new single that she wrote especially for the Atlantic Ride. The support for the Ride continues to grow, while unfortunately each year has seen new names of police officers, firefighters and paramedics added to the list of the fallen.

In the three years that this event has been hosted out east, many hurdles have been overcome. For instance, while the Ontario ride is escorted solely by police officers on motorcycles, there are only about 12 police motorcycles in all three of the Atlantic Provinces. Since Darrell wanted all the agencies to be able to take part, his traffic plans included police cars and police bikes. Early on, one police bike driver voiced the concern that bikes and cars don’t mix, especially when darting in and out of traffic. But sure enough, it worked, and was pulled off without a hitch.

For the PEI ride, Darrell added sponsors such as XTL Transportation, and with the help of Bob Beal from XTL, they transported 14 Toronto Metro bike officers and their bikes to Prince Edward Island. In addition to assisting with escort duties, they also hosted a precision motorcycle skill riding show.

Then there was the question of fuel. How do you gas up 150 motorcycles and over 20 police escort vehicles? Darrell and his team executed a plan to staff gas stations along the route with volunteers, and every motorcycle and vehicle was fueled up within half an hour. In fact, security concerns, accommodations, and meals along the routes all have gone flawlessly.

Darrell and his team are always looking for ways to enhance this event. He has developed a Facebook page that continually posts about past rides, ongoing emergency responder activities, and upcoming happenings. Check out and “Like” their Facebook page: Canada’s 911 Ride – Atlantic.

The ride has many facets. It brings police officers and emergency responders from three provinces together in one place, where lasting relationships are made. The ride travels through many communities, where ride participants mingle with the public at planned community greeting points. The event has become something to look forward to each year.

The 2018 edition of Canada’s 911 Ride - Atlantic will return to New Brunswick on June 9 and 10, based out of the host city of Saint John. We look forward to it, and are sure that once again, it will go smoothly and be a memorable experience for everyone involved!