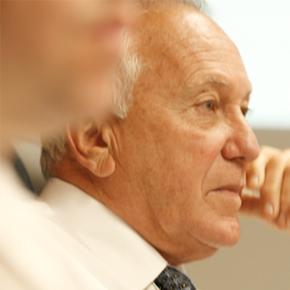 In the midst of a large, complex project to integrate the operations of seven acquired companies into one, Dick Drutman, the President of Garda Cash Logistics, was a busy man. His teams were working hard at everything from new decals for the armored vehicles and signage for buildings to business processes and standardized training.

As he entered the large conference room at Garda’s Montreal headquarters to review the project with his management team, he scanned the faces around the table. “Where’s Nathalie?” he asked eagerly, looking for Nathalie de Champlain, Garda’s Vice President of Marketing & Communications and Chief of Staff in the office of the CEO.  At the top of his agenda that bright spring morning was presenting her with “Leo the Lion,” a stuffed animal from the renowned San Diego Zoo that was soon to become the favorite toy of her son Mateo.

Dick’s staff smiled at the familiar sight; Dick going out of his way to bring happiness to someone.  As the meeting commenced, he gave Leo the Lion to Nathalie with grandfatherly pride, savoring the thought of how her one-year old son would react.

“Dick genuinely cares for the people he works with,” says Nathalie, fondly remembering his presentation of Leo, complete with some background on the zoo itself, located in his home town. “His enthusiasm and empathy for people are infectious and create a culture of respect and positive attitude.”

In our age of warp-speed business and technology, you don’t often hear the term “renaissance man” applied to business executives but it describes Richard Drutman perfectly. His long and illustrious career spans law enforcement, technology and cash logistics and his technical expertise and sophistication are enhanced by his friendly personality and love of people. The consummate business executive, he has a courtly manner and gracious style with which he greets everyone. The axiom “there are no strangers, only friends I haven’t met yet” captures the warm solicitous nature of the man. His conversation sparkles with evidence of the degree to which he is engaged with the world – from his business acumen and status as a recognized expert in cash logistics, data security and workplace violence to his deep involvement with civic and charitable endeavors.

“Dick is a part of my family and I of his,” says Linda Slattery, Vice President of Employee Relations at the company, who has known and worked with Dick for more than a decade. “He and his wife Eileen love to travel. He is very active with charitable organizations. He is also,” she notes with a chuckle, “a salesman to the end.”

Engaging with customers and prospects is a favorite activity for Dick, who joined the company in 2001 as Executive Vice President responsible for all sales and marketing functions. As his sales teams will attest, he is passionate about treating customers with the utmost of respect and always, as he describes it, “taking magnificent care of them.” His success with that approach is best measured by the large number of long-lasting friendships he has developed over the years.

“Customers and employees alike really appreciate Dick’s availability and responsiveness,” Senior Vice President Michael McSpadden emphasizes. “He has a requirement that we respond to customers and employees requests within 24 hours or less. People who have worked with Dick know that he practices what he preaches.  He is demanding of himself and of his team, scrupulously fair and he inspires people to achieve superior performance. His success comes from connecting with people directly. He prefers speaking with people face-to-face or over the phone, not with emails or voicemails.”

Before joining Garda, he was President & CEO and Executive Vice President of Arcus Data Security, an Iron Mountain company that provides offsite data protection throughout the U.S. and Europe. Reflecting back on his career, one of Dick’s most satisfying accomplishments was the 27 years he spent as a volunteer Reserve Police Officer with the City of Monterey Park in Los Angeles County, rising to the rank of Deputy Chief. He was one of the senior officers responsible for security for the 1984 Olympics in Los Angeles.

“That was an exciting time,” Dick recalls. “Security for those Games was a monumental undertaking. Tensions were high with the Russian team boycotting in retaliation for our shunning the previous Olympics in Moscow. One of our guys was convinced he saw Carlos the Jackal strolling through one of the venues,” Dick laughed. “That was a false alarm but the energy level and excitement were at an all-time high.”

Dick is a lifetime member of the California Police Officer’s Association and a 25-year member of the American Association for Industrial Security. In 2008, he was honored by his alma mater, California State University at Los Angeles, where he majored in Political Science, when he received the Distinguished Alumni Award from the College of Natural and Social Sciences. “Because of Dick’s leadership and inspiration, the integration of the cash logistics organizations we acquired and the development of our market-leading platform have forged our success and leadership in the North American market.” said Garda’s President and CEO Stephan Cretier. “He helped me establish a strong entrepreneurial culture as we integrated seven companies into “One Garda”, achieving significant operational synergies. He focused his management team on achieving superior quality services and results in a totally customer-centric organization. I know that I speak for our customers and employees when I say I am delighted that Dick will join our Board of Directors and continue contributing to our success as our resident cash logistics expert.”