Garda’s Band of Brothers Prepare to Serve in Afghanistan 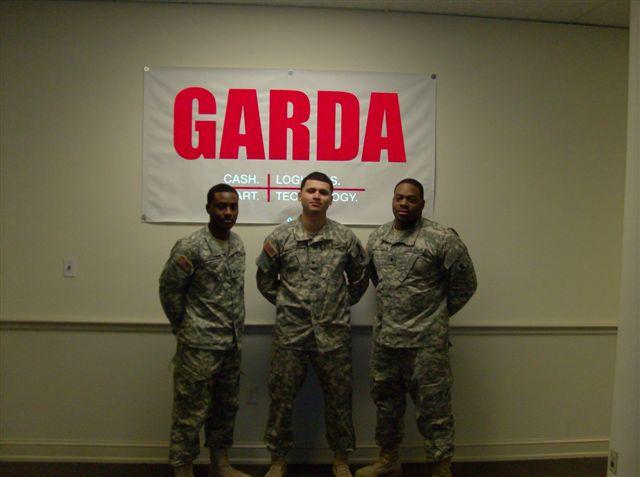 Embarking on one-year tour of duty as America’s involvement winds down.

They work in the cash vault in Garda’s Wilmington Delaware office and call themselves “the band of brothers.”  After just a few minutes of conversation, it is obvious how well the name fits. The three men interact with an easy banter, peppered with jokes, good-humored insults and teasing.

Jorge Vidal, Will Matthews and George Taylor have worked together in the Wilmington vault for more than a year and are about to embark on a one-year tour of duty in Afghanistan as members of the U.S. Army.

Pedro Maldonado, who was Vault Manager until his recent promotion to Assistant Branch Manager, has nothing but praise for the three men.

“They are hard workers, very diligent and extremely patriotic,” he says of the trio. “They’ve been together for quite a while. I’m really going to miss them.”

Vidal, Matthews and Taylor agree and joke about how stressed Maldonado will be when they depart. Laughing as they deem themselves as “irreplaceable,” they promise to return when their military duties are completed.

During Hurricane Sandy, they were called up with their National Guard unit to help with the recovery. After long days working on the clean-up, they returned to the branch to help their co-workers who they knew were short-staffed.

“They didn’t want to leave their colleagues short-handed,” Maldonado recalled, highlighting that as an example of their dedication and loyalty to their co-workers.

The three men, who work in the Wilmington facility cash vault preparing shipments for delivery, loading and unloading the armored trucks and operating coin-loaders, met in their National Guard unit and Jorge recruited Will and George to join Garda.

“We were at a National Guard family picnic,” Taylor said, and during a tug-of-war competition Vidal’s mom told me that her son’s company could use a guy your size.  Jorge encouraged us to apply, we met Pedro and the rest is history.”

In Afghanistan, the three will work as part of a communications unit, setting up satellite communications systems and towers. They will be assigned to different bases in the country once deployed but hope to stay in contact.  They were also pleased to learn that GardaWorld operates in Afghanistan and are looking forward to meeting colleagues from that part of the company.

Sitting together at the Wilmington branch two weeks before their deployment to Afghanistan, the three men speak almost as one in describing why they are going on their tour of duty.

“It is an honor to go,” Matthews says matter-of-factly, “to put on the uniform and go serve our country.”  Vidal and Taylor echo that feeling and the mood turns serious as they reflect on what is to come.

They will be leaving families and loved ones behind to serve. Taylor has two young daughters and Matthews is to become the proud father of twin boys while in Afghanistan. Vidal got married just before leaving and is looking forward to starting a family.

“You have to cherish the ones you love,” Vidal says quietly before Matthews recalls the encouragement provided by one of his sergeants to “go forth and do great things.”

The three took the name “Band of Brothers” from a popular television series of that name about a combat unit in World War Two but the origin of the name is more apt still. It comes from Shakespeare’s play Henry V and a scene where the young king rallies his troops before the Battle of Agincourt referring to them as “We few, we happy few, we band of brothers.”

“We really are all brothers here,” Maldonado says. “We watch out for each other and care about each other.”  He and other from the branch were on hand in Dover at the send-off ceremonies to wish Vidal, Matthews and Taylor George well and a safe return.