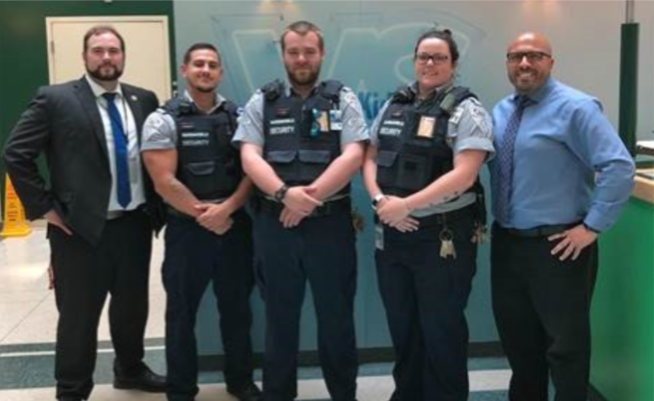 By apprehending an intruder on the grounds of Toronto's SickKids Hospital, three GardaWorld security guards once again demonstrate the importance of working as a team, remaining professional and staying calm.

The Hospital for Sick Children in Toronto, commonly referred to as SickKids, has been experiencing issues with break-ins and homeless people attempting to find shelter in one of its buildings. During a routine exterior patrol, Security Guard Leighland Cotter took note of a suspicious male in an exterior gated area. The individual was trying to gain access to the building while another guard, Karlie Robinson, advised him to exit the gated area. Uncooperative, the man began to make his way up a fire exit ladder. At this time, a third guard, Michael Baglione, pursued the trespasser, following him onto the roof.

Cornered, the man seemed to be looking for a place to jump and plot his escape. That’s when Michael engaged in conversation with the troubled man, managing to calm him down and convince him to climb back down from the roof. Once Karlie explained to the man that he was under arrest for trespassing, he resisted and attempted to flee. The security team then worked together to execute a professional and careful arrest of the male until police officers arrived. Toronto Police revealed that the male was a missing person from Laval, Quebec.

Thanks to the excellent intervention of our guards, Leighland, Karlie, and Michael, a trespasser and missing man was located, apprehended and brought to safety. Well done!