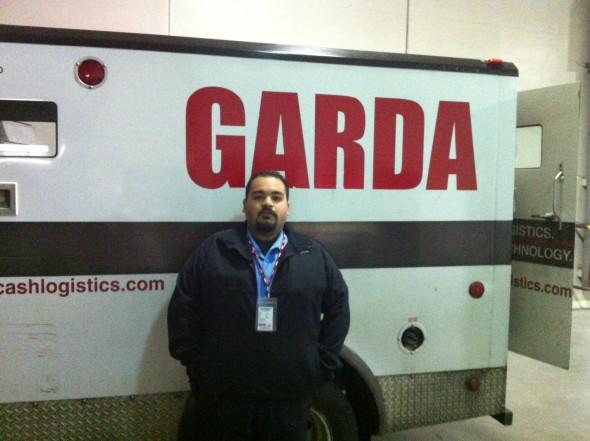 Something wasn’t right about the suspicious-looking man in a dark hoodie and jeans standing outside the Springfield US Bank on March 21, 2013. Garda’s Driver Damion Pearce, and Messenger, Manuel “Manny” Pena noticed the individual keeping a close eye on the activity surrounding the truck as Manny entered and exited the client location.

“I went in to service the bank and when I returned I noticed the suspect was no longer standing there, he was walking toward me very quickly with one hand in his pocket,” Manny stated in his report.

“I could see both me and Manny were keeping an eye on him,” said Damion. “I didn’t suspect anything at first, until I saw the suspect’s hand in his pocket.”

“I stepped away from the truck and told the suspect to stop,” Manny continued in his report. “He proceeded to tell me to give him the money. At that point I knew there was a robbery in progress and I had only a few seconds to decide what to do.

I made the decision to pull out my firearm and kept it pointed toward the ground. I was prepared to use it if needed. It was at that point the suspect stopped quickly, turned and walked around the bank,” Manny described.

“People always think, this won’t happen to me,” said Bruce. “We train our people to be diligent and that’s exactly what Manny and Damion were doing that day. If it wasn’t for the fast-thinking and prepared reaction of Manny, things might have turned out tragically different.”

“Manny should be recognized for his bravery,” added Garda Senior Operations Manager, Ron Bennett. “He acted exemplary in an otherwise frightening situation.”