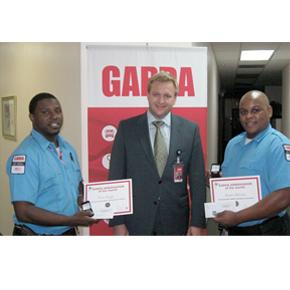 Garda President and COO Chris Jamroz presents Travis Griggs and Kendrix Williams with Garda Ambassador certificates and pins in recognition of their vigilance and swift actions in preventing an armed robbery recently.

“Messenger Kenny Williams and Driver Travis Griggs both conducted themselves admirably, in keeping with the Garda standard of excellence,” noted Garda Vice President of Corporate Security Ed Hopkins in his report of the incident. “Because Kenny was alert and paying close attention to his surroundings, he detected the threat and successfully prevented the robbery. Travis was also alert to his partner’s situation, notifying police while assisting Kenny in his safe return to the truck. This event is an example of how to ‘do it right’!