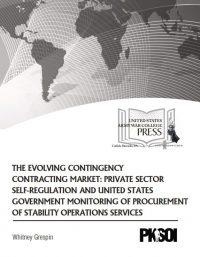 GardaWorld has been cited in the recent edition of the US Army War College PKSOI (Peacekeeping and Stability Operations Institute) publication.

The contingency contracting industry has shifted markedly in recent decades. The events of 9/11 led to a complete reorientation of military and stability operations activities worldwide such that the primary operating theater of many existing companies shifted almost entirely to Afghanistan and Iraq, while government demand also allowed for the creation of a myriad of new private entities to provide contingency contracting services. As U.S. Government (USG) contracting requirements react to drawdowns from these two concurrent large-scale ground engagements, the nature of the primary goods and services provided by the private defense industrial base will respond accordingly.

This transition away from private company support of large military engagements has also been coupled with a reorientation of industry focus away from combat environments towards support operations in increasingly frequent, but risky, stability operations. These types of operations necessitate augmented private sector support for commercial efforts in austere environments, as well as international missions that have shifted from UN “Chapter VI” peacekeeping missions to increased peace enforcement missions of the “Chapter VII” variety. The Office of the Secretary of Defense (OSD) states that, “‘Contingency contracting’ encompasses all contracting performed in a contingency environment (declared and non-declared), including military operations, stability operations, natural disasters, humanitarian, and other calamitous events.”

The activities of private companies in combat operations and complex environments have traditionally drawn minimal attention when compared to their historic presence in such settings; yet in the last twenty years the services of these companies have grown to become a seemingly indispensable part of the modern western stabilization arsenal, as well as the subject of much media attention. The governments that procure these companies’ services put a great deal of faith and trust in their operations. While government contracting practices trend away from massive life support operations (accommodations, catering, facility maintenance, etc.) and back to the provision of people-based services, it is important that this manpower be sourced and monitored responsibly and ethically in order to uphold the principled aspirations of the U.S. and align policy practice with preaching.