Shining the spotlight on two of GardaWorld’s courageous security guards 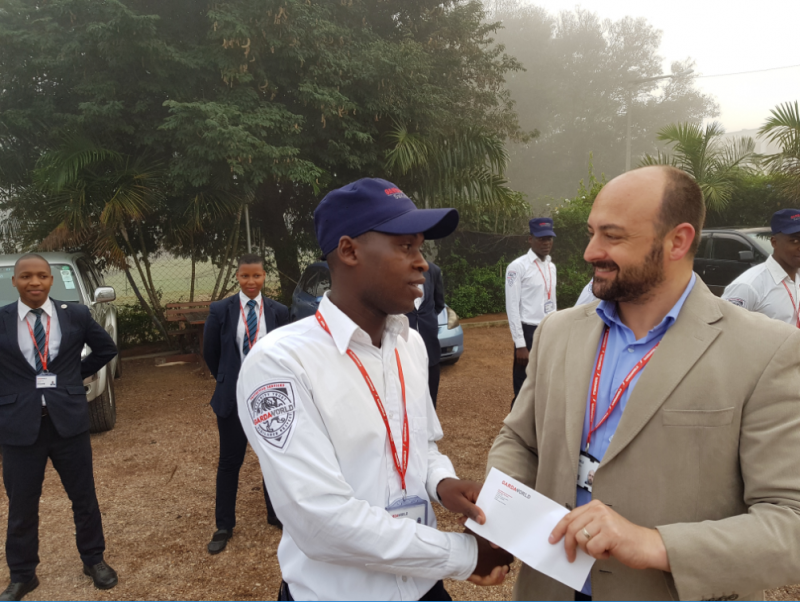 An Act of Bravery: Recently, while on duty at the Cardoso Hotel in Maputo, Gabriel Assuluta watched in horror as two men jumped out of the bushes and attacked a guest who had just left the hotel and was walking down the street.

The hotel guest yelled and the muggers stabbed the client twice in his leg. Without any thought for his own safety, Gabriel ran toward the attackers, who fled as he got closer. Gabriel picked up the client and sat him down closer to his guard post. He inspected the wounds and applied pressure to them. He alerted the Control Room and requested immediate assistance.

Selfless actions to protect a life

An ambulance arrived and took the client to hospital where he received treatment and was kept under observation for 24 hours. The client made a full recovery and is back in the UK with his family.

Gabriel is a shining example of what a GardaWorld Security Guard strives to be. He earned the respect of his fellow Security Guards, supervisors and managers. We are very proud of his actions. His quick thinking reinforced the strong reputation of GardaWorld in Mozambique—and may have even saved a life.

A dedicated career to serving others with professionalism and respect: Steve Berthelotte, a security guard in Montreal, Quebec takes pride in his work, is a team player and is passionate about emergency response. Steve is one of our 22,000 security guards in Canada.

“At first, I would sometimes feel unsure of myself, but with experience, the job has come naturally.” With GardaWorld for 18 years, he has worked in multiple sectors, including the airport, hospitals and banks. While the essence of the work remains the same, the challenges in health and safety differ, depending on the work environment.

A range of experiences, from port security to hospital security

At the Port of Montreal, Steve witnessed a collision between a train and a truck. As the first responder on site, he provided first aid to the truck driver. To help him maintain his calm, Steve asked routine questions while waiting for help to arrive. While working as a security guard in the hospital, Steve had to escort a man treated for a gallbladder infection out of the hospital. The patient was highly contagious and refused to leave the premises, posing a danger to other patients. Though Steve was concerned about getting infected, as his wife had just given birth to their second child, he performed his duty with professionalism and courage.

At the Immigration Prevention Centre, where Steve is currently stationed, he is sometimes faced with altercations between inmates. Intervening without the use of force requires experience and an ability to quickly analyze the situation. “The work of a Security Guard requires a respectful and authoritative manner and good self-control. I feel I’ve found my place,” concludes Steve.